On Sunday evening, March 18, 2018, 49-year-old Elaine Herzberg was crossing the road in the middle of a Tempe, Ariz. block when she was struck by an Uber self-driving car, becoming the first pedestrian death caused by an autonomous vehicle. Media judgment was swift, with an USA Today headline trumpeting, “Uber self-driving car kills Arizona pedestrian, realizing worst fears of the new tech.”

A few days later, a Tesla driver was killed when his Model X struck a median barrier. Tesla reported that the 38-year-old driver’s hands were not on the steering wheel in the six seconds prior to the crash. It was the second driver killed in a Tesla while in “Autopilot” mode.

These three deaths garnered massive media attention because, in each instance, innovative self-driving technology failed to prevent an accident from happening. Yet none of the Uber accident reports mention the nearly 15 pedestrians killed each day in crashes with motor vehicles driven by ordinary humans.

And Apple Engineer Walter Huang, the Model X driver killed in the crash, is but one of nearly 40,000 annual deaths caused by motor vehicle accidents, equal to an average of 102 per day.

How many people do today remember Lt. Thomas Selfridge? Or Eugene Burton Ely? On Sept. 17, 1908, Selfridge was flying with Orville Wright when the plane’s propeller hit a wire 75 feet in the air, throwing the plane out of control and killing Selfridge while seriously injuring Wright. Ely died in a crash during a demonstration flight at the Georgia State Fair on October 19, 1911. Imagine if the history of aviation ended there.

There is no question that new car technology has contributed to safer cars. In the decade preceding 2013, the number of traffic fatalities declined 25% to 32,719. A sharp rise in 2016, currently estimated at 37,461, is being attributed to increases in drunk driving, speeding and unbuckled seatbelts.

Distractions caused by Screensucking have already proven to be a major impediment to car safety. Autonomous cars would allow drivers to safely use their smartphone more, which is among the top self-driving activities cited by consumers: 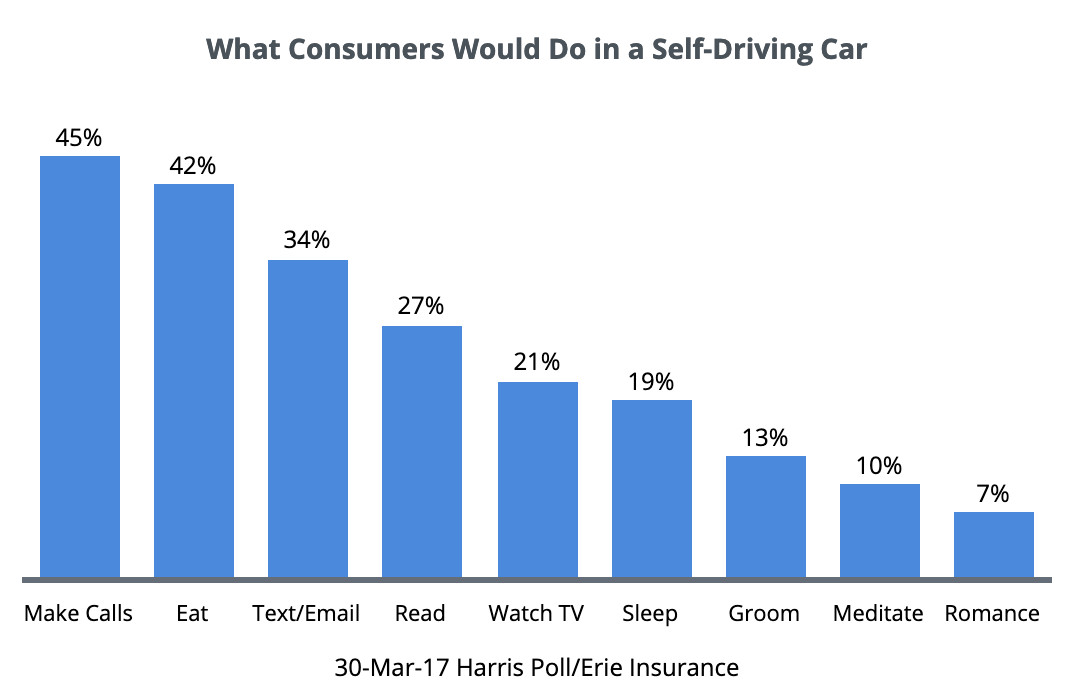 There has been much speculation as to when mass-produced, self-driving cars would arrive. According to Quora, the consensus is 2020. You can move that needle back two years because both Audi and Tesla are vying to be the first to launch automobiles that can legitimately be called self-driving cars.

The 2019 Audi A8 ($100,000+), launching later this year, will be the first production vehicle with SAE level 3 autonomy. Audi’s “AI traffic jam pilot” can drive all by itself at speeds of up to 37 mph (60 kph). Audi claims that the A8 is the first car to use a LIDAR laser scanner. The AI system handles acceleration, braking, steering and starting from a dead-stop, all without a driver paying attention, but only on roads with a physical barrier separating oncoming traffic.

Tesla’s second-generation, eight-camera “Enhanced Autopilot” system ($5,000) will reportedly make Tesla cars partially autonomous (no SAE level provided, or promised). Both are eagerly awaited. BI Intelligence reports that 64% of study respondents are “much more” or “somewhat more interested” in a car with self-driving features.

Driving and robotics were made for each other and the impact of self-driving cars on traffic accidents should be clearly evident by 2035. Meanwhile, drive safely.