Rich Americans Have Grown Their Share of U.S. Wealth by $19 Trillion Since 1989

To kill time in quarantine, bored rich people are shopping online for $500,000 bracelets. Why not? The richest 1% now owns 50% of the world’s wealth. How are you spending your time? Standing in line to buy groceries? Huddled at home sewing masks? While you try to survive, the rich are cleaning up due the Federal Reserve’s new “limitless” bond and ETF purchasing power.

How sick and twisted is a society where grocery clerks make $12-15 per hour working on the frontline, risking their lives and getting sick to feed America, while the 1% abuse government bailouts? 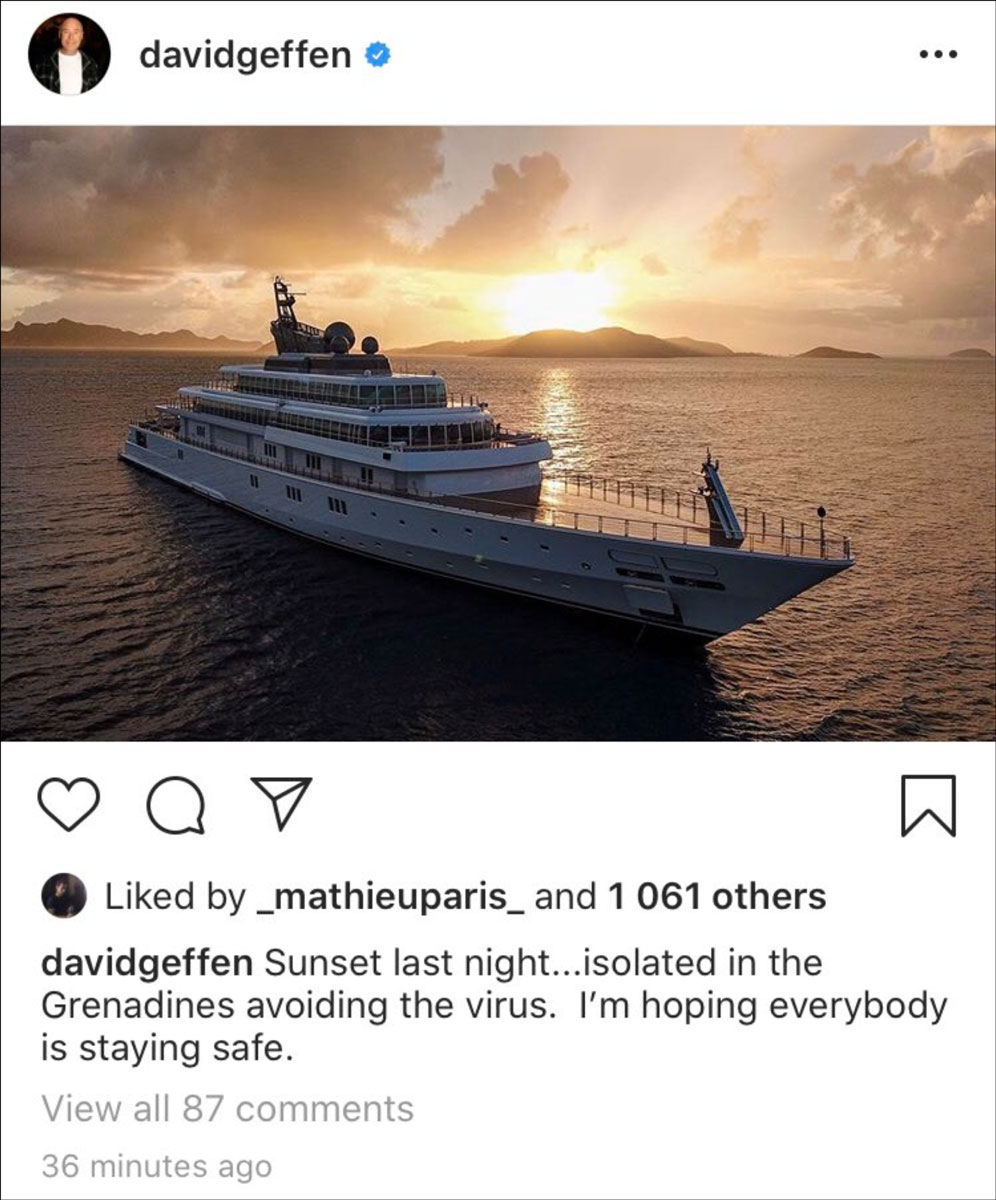 DreamWorks co-founder David Geffen created a social media firestorm on March 28 when he posted a photograph of his $590-million mega-yacht on Instagram with the words, “Sunset last night…isolated in the Grenadines avoiding the virus. I’m hoping everybody is staying safe.” For a former music producer, Geffen is quite tone-deaf.

How did the rich get so wealthy? As The Collapse of Business Ethics explains, between 2008 and 2019, U.S. corporations spent more than $6 trillion buying back their own stock, money that largely ended up in the pockets of wealthy investors. And since the wealthiest 10% of American households control more than 80% of household stock ownership, the U.S. middle-class and the poor received next to nothing.

The CARES (Coronavirus Aid, Relief, and Economic Security) Act accelerates that “enriching the rich” process by surrounding the U.S. Treasury and Federal Reserve with a smokescreen, which, in effect, shields a $4.5 trillion hedge fund that protects corrupt corporations and bankrupt bond brokers with bail outs paid for by our tax dollars.

Even the rich 10%, however, must tip their hat to the ultra-rich, the top 1%. In 2017, the top 1% increased their total global wealth 6% to a staggering $280 trillion, the fastest wealth creation since 2012, reports Credit Suisse.

The rise of top incomes relative to the bottom 99% represents a sharp reversal of the trend that prevailed in the mid-20th century. From 1928 to 1973, the share of income held by the top 1% declined in every state for which we have data. This earlier era was characterized by a rising minimum wage, low levels of unemployment after the 1930s, widespread collective bargaining in private industries (manufacturing, transportation, telecommunications, and construction), and a cultural, political, and legal environment that kept a lid on executive compensation in all sectors of the economy.

That sharp reversal has led to a world with 2,095 billionaires, down 58 from a year earlier, with a combined net worth of a mind-numbing $8 trillion.

In America, the value of assets for all U.S. households increased from 1989 through 2016 by an inflation-adjusted $58 trillion. A full 33% of that gain, $19 trillion, went to the wealthiest 1%, according to a Wall Street Journal analysis of Fed data.

All this wealth was not earned via the value creation — it was skimmed and embezzled from the bottom 95% via government bailout of banks and Wall Street; excessively high healthcare costs; “resort fees;” bankster penalties; excessively low-interest loan rates and tax givebacks to the wealthy — all influenced by control-freak monopolies and cartels unburdened by competition, accountability or transparency.